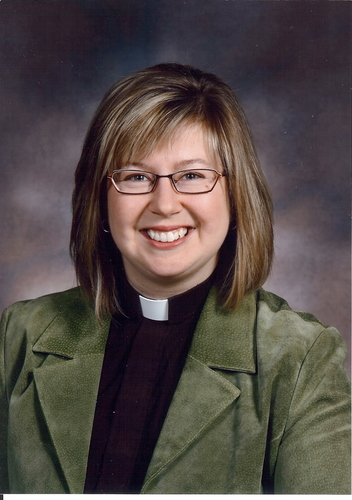 The Reverend Andrea Christensen serves as Rector of St. Timothy’s. Andrea is a compassionate and energetic leader who has been involved in parish ministry, administration and management for over eighteen years. She has a deep passion and love for serving Christ and His Church.

Andrea was born in Kitchener-Waterloo, Ontario. She moved with her family first to Agincourt, where she attended Terry Fox Public School from grades one through six.  Andrea’s family then moved to Stittsville (Ottawa West) mid-way through her sixth grade year.

Andrea has a Bachelor of Arts Degree (Hons.) with a major in Sociology and minor in Religion from Bishop’s University in Lennoxville, Quebec where she first discerned her call to ordained ministry.
Soon after graduating, she began a three year Master of Divinity at Wycliffe College, University of Toronto. In 2001, Andrea was ordained to the priesthood and began her ministry and work as an Assistant Curate at St. Matthew’s in the Glebe, in the Diocese of Ottawa. Three years later she followed a call to the Parish of Fitzroy Harbour where she became Rector of the two-point parish for nearly four years.

At St. Hilda’s, in the Diocese of Toronto, Andrea held a two-fold position as Associate Priest as well as Assistant Executive Director of a Retirement and Assisted Living Facility where she managed several departments and off-site properties for five years.

Andrea then followed a call to Christ Church Deer Park where she served both as an Associate and then as Interim Priest-in-Charge for three years.

Andrea is passionate about building disciples, stewardship and discernment of gifts. She is blessed to serve a people who love Christ and are passionate about sharing the good news of the gospel!

Andrea is married to Ben, an IT business owner, former triathlete and amateur sommelier. Both Andrea and Ben adore hikes, cooking and picnics in the park with their 7-year-old son, David- who adores all forms of transportation, especially trains.  Ben and David are members of the St. Timothy’s worshiping community.