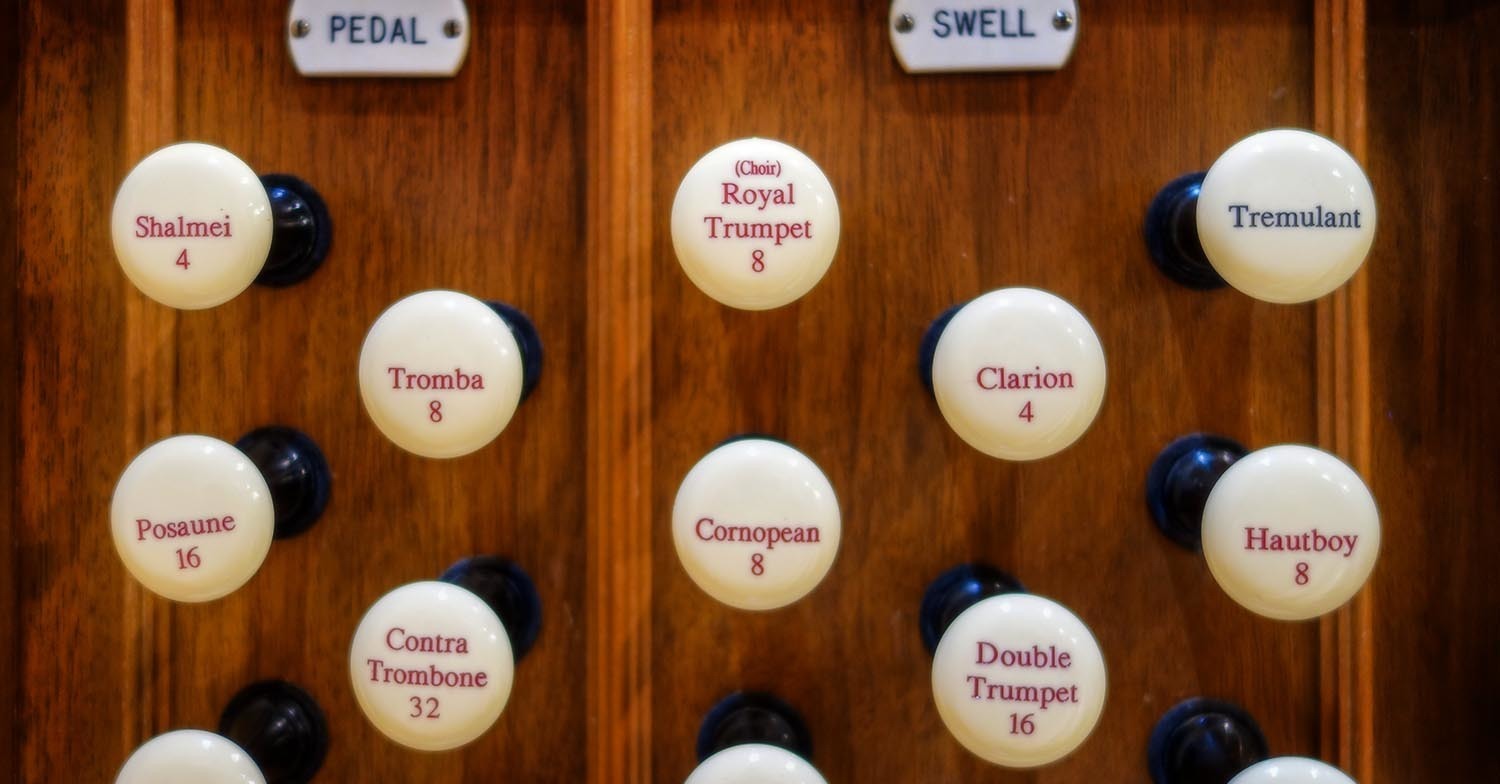 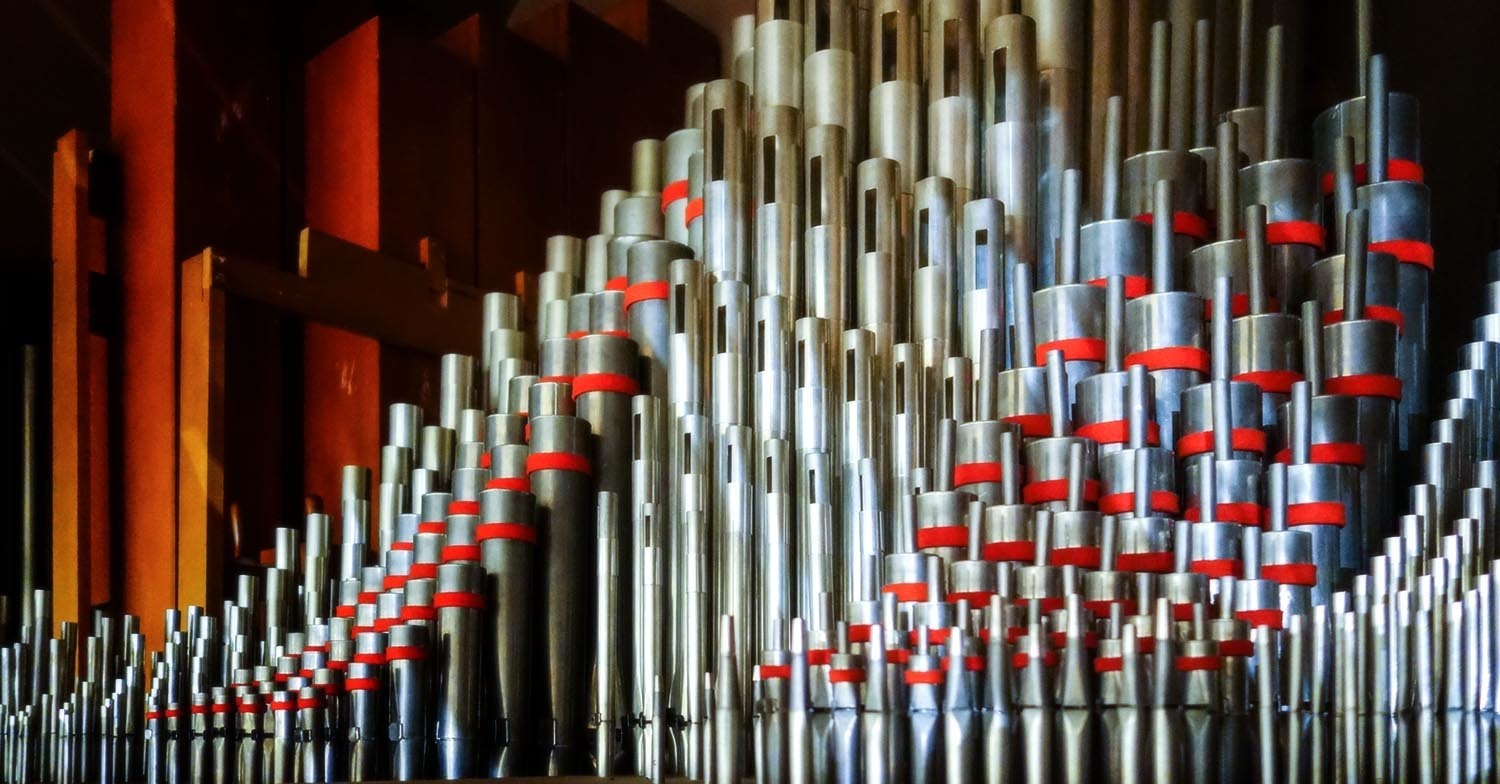 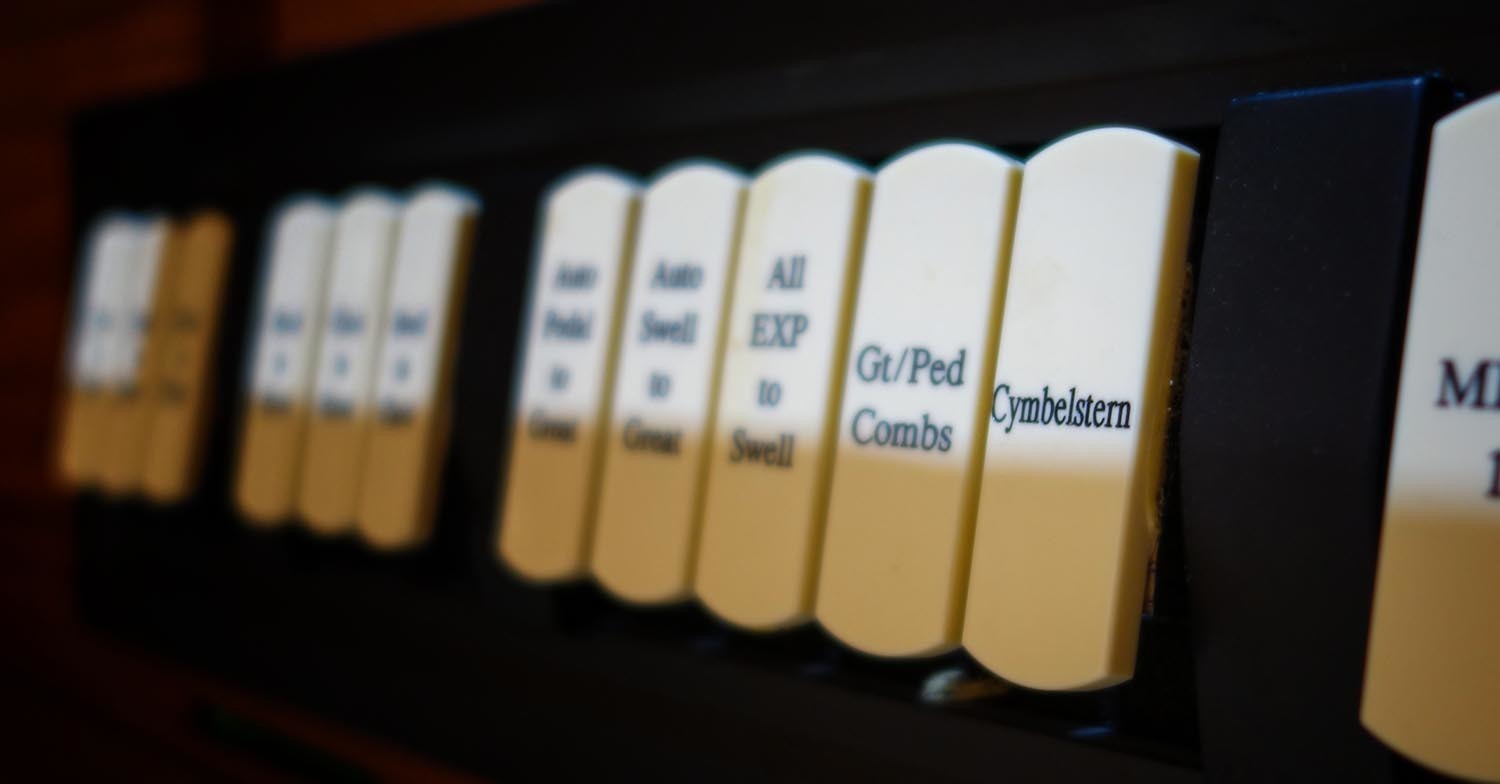 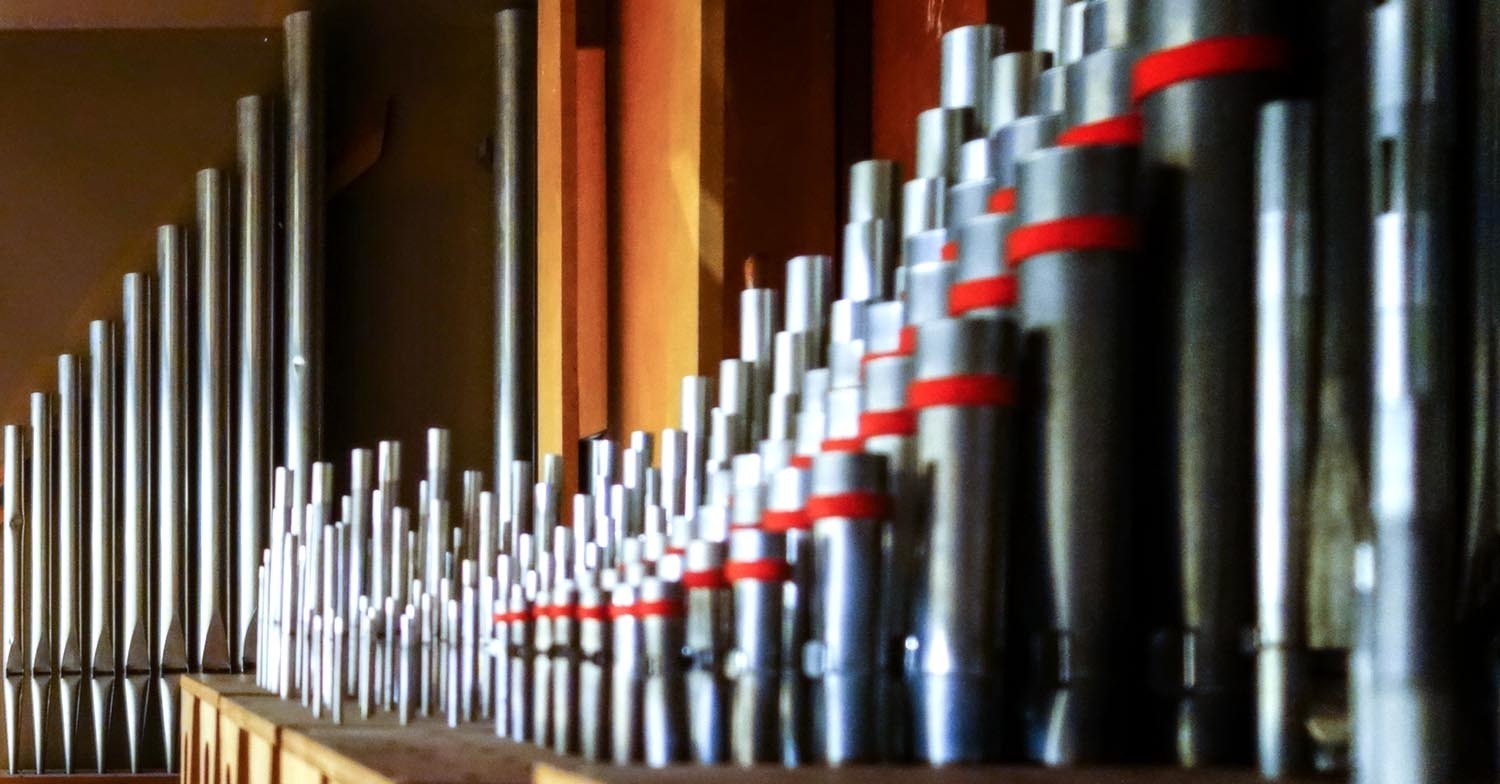 Overview How do I join the Choir? Why should I sing? Do you play a musical instrument? The High School Choral Scholars Program Learn about St. Timothy's Pipe Organ Pipe Organ Specifications List of Organists & Choir Directors

A pipe organ is a musical instrument that forces air through an assortment of pipes made of wood and metal. The pipes cause the air to vibrate, producing sound. The highest pitches come from pipes the size and shape of a ballpoint pen while the lowest tones require pipes the size of a chimney. The tallest pipes in the St. Timothy’s organ measure sixteen feet. The pipes, the mechanical wind supply, and the air reservoir are in the pipe chamber high in the south chancel over the vestry.

The pipes in the pipe chamber are arranged in sets called ranks. Each rank has one pipe for each note. The organ has many ranks; each one produces a specific timbre or quality of tone. Wooden pipes sound different than metal ones. Some pipes force air across an opening like a flute while others have a vibrating reed like a clarinet. The pipe's diameter, whether it's straight or tapered, the shapes and sizes of openings, and whether the pipe's ends are open or stopped all affect the timbre.

When the organist draws a particular organ stop using the draw-knobs on each side of the console, the pipes in one particular rank in the pipe chamber will speak when the corresponding keys or pedals are depressed. Drawing several stops at once creates a chorus of individual ranks all speaking at once, just like the individual instruments playing together in an orchestra.

A rank of pipes that speaks at pitch is known as an 8' (eight foot) stop because that's the approximate physical length of the tallest pipe in such a rank. Draw any 8' stop and when you depress Middle C on the manual, you'll hear a Middle C.

Stops called mixtures consist of multiple ranks of pipes, including some mutations. The Great Organ's Fourniture IV stop and the Swell Organ's Mixture IV each sound four pipes for every note depressed. Like mutations, individual mixture stops are seldom played alone. Instead, the individual pitches blend to add brilliance to other stops.

Our pipe organ is a hybrid instrument. In addition to the ranks of acoustic organ pipes in the pipe chamber, some stops activate virtual ranks of digitally sampled sounds generated by electronic components. This allows us to have a much greater variety of stops than traditional organ pipes alone could provide, not only due to cost but also because of the physical space required for acoustic pipe work. For example, while the tallest physical organ pipe at St. Timothy's is sixteen feet, the Pedal Organ features two virtual stops that generate the powerful floor-shaking vibrations of acoustic pipes thirty-two feet in length.

The St. Timothy’s organ includes a virtual antiphonal organ housed in two cases at the rear of the nave above the west doors. In addition to the sounds emanating from the pipe chamber, the organist can cause some of the virtual pipe ranks to speak from the back of the church.

The designers worked carefully when crafting the instrument to ensure the acoustic and virtual ranks blend seamlessly. Even from the console it’s difficult to discern which stops are which.

The original pipe organ, which remains at the core of the current instrument, was designed, built, and installed in 1969 by the J.C. Hallman Organ Company of Kitchener, Ontario. The organ was dedicated on Sunday, October 26, 1969. St. Timothy's Assistant Priest Rev. Robert R. Bonis, also a prominent Scarborough historian, wrote a hymn especially for the occasion. It was sung once again on the organ's 50th anniversary, marked on Sunday, October 27, 2019.

Now with Joy Let Us Adore Him
by Rev. Robert R. Bonis
Composed for the Organ Dedication Service
Sunday, October 26, 1969

Now with joy let us adore him,
God is in this holy place,
Source of all earth's wondrous music
Mid the stars in silent space,
Nature's countless choirs of beauty,
Birds at dawn and thundering seas,
Poets' songs and great musicians'
Rich resounding harmonies.

Giver of the joy of hearing,
Tune our hearts to know your voice;
Free from ancient fears, let all of us
In your world of sound rejoice:
Speak in lightning, storm-swept mountain,
Avalanche and roaring fall,
Soft spring rain, ripe wheat awhisper,
Lake at sunset, wild loon's call.

Crown of all creation's wonders,
You have shaped our mind and speech
To reveal your heart in music
Far beyond birds' highest reach:
Let your being burn within us,
Cleanse our hearts and lips with flame,
Make us living words of beauty
Singing forth your glorious name.

Master lover of all music,
Single note and symphony,
Hear our whole-heart dedication
To all God-born harmony:
Pipes in one great artist's organ,
Each responsive to foot and hand,
Instruments in God's high service,
Send us singing through the land.

The original two-manual and full pedalboard console was divided into three divisions: Great Organ, Swell Organ, and Pedal Organ. The Great Organ was controlled by the lower manual and the Swell Organ by the upper manual. The thirteen ranks of pipes were located in a case in the south transept, using the pipes for the Principal 8' stop on the Great Organ as a facade. Most ranks had more than 61 pipes in order to provide 2' versions of the stops at higher pitch. The Swell Organ was enclosed in a box with wooden louvers, much like window blinds, that could be opened or closed via a foot pedal on the organ console. That allowed the organist to vary the volume and timbre of the instrument without drawing or retiring stops. The Swell Organ was boldly voiced by metal pipes manufactured by the Dutch firm Jacques Stinkens Orgelpijpenmakers.

In the early 1980s, Keates-Geissler Pipe Organs Ltd. of Acton, Ontario (which had acquired the J. C. Hallman Organ Company) moved the pipes, the Swell Organ enclosure box, and the windchests to a newly-constructed pipe chamber. This structural addition to the church building opens into the south side of the chancel, above the vestry.

A major renovation in 1997 added new electronic controls to the console, enhanced the Pedal Organ, and added a virtual antiphonal division at the back of the nave, housed in two cases above the west doors.

The 2013 redesign and expansion

They consolidated most of the existing organ pipes to create an unenclosed, non-unified Great Organ which they placed in the pipe chamber on the south side of the chancel that had been added to the church building in the early 1980s. A 'unified' organ division allows more than one stop to control the same rank of physical pipes. For example, an 8' stop would sound at unison while a 4' stop would sound the exact same rank of pipes but an octave higher. A 'non-unified' organ division has a separate rank of pipes for every stop, specifically voiced for its intended role.

To those acoustic components of the original Hallman instrument, the team added virtual digital ranks generated by Hauptwerk digital sound samples. They carefully selected a combination of virtual ranks from a variety of sources, including some English reed stops, to achieve the required tonal character. Temperature changes cause acoustic pipes to expand and contract, altering their pitch. A sensor near the pipework allows the software to make tiny adjustments in the pitch of the virtual ranks to ensure they're always in tune with the acoustic ones.

The team replaced the Hallman console with a reclaimed three-manual, full pedalboard console built in 1964 by the Aeolian-Skinner Organ Company of Boston, Massachusetts for their opus 1430 organ at the Columbus, Georgia First Presbyterian Church. When that organ was later greatly expanded, it required a larger console and we acquired the original one. It still bears the Aeolian-Skinner trademark but only the console was manufactured by that firm, not any of the sound-producing components of our organ.

To control the expanded instrument, the team chose the Opus-Two integrated control system, developed in Ottawa. These electronics and software interconnect all the individual acoustic and virtual components with the console controls, manuals, and pedalboard.

Instead of drawing and retiring many individual stops at once, the organist can pre-select combinations of stops and store them in memory. Later, one touch of a control called a combination piston will recall the pre-selections instantly. The Opus-Two system, with its 99 memory levels, allows the organist to assign 99 different pre-sets to every one of the instrument's 32 combination piston controls.

The redesigned and expanded instrument was rededicated on Sunday, September 8, 2013. The commemorative plaque on the east side of the console reads:

The refurbishment and enhancement
of this Organ was made possible through generous gifts from the
family of Helen and Max Barnett (1928-2011)
and an anonymous donor.

"Besides theology, music is the only art capable
of affording peace and joy of the heart." - Martin Luther

The result is an instrument well-proportioned to the physical size, space, and natural acoustics of St. Timothy’s, with a robust complement of individual stops voiced in an English Cathedral-style, and great flexibility in accompanying everything from the most delicate liturgical moments to the grandest triumphant hymns.